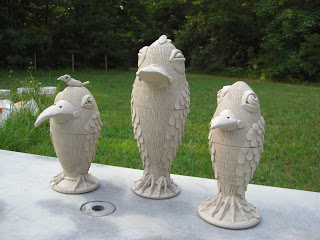 Since I’ve decided to make an entire flock of these critters, I need a tracking system of some sort or other. I once did a ‘100 Fishes” project, a limited edition of small vases, no two alike, numbered and recorded in a lovely book that Paul made for me. Of course, it wouldn’t do to repeat that trick, so I’ve decided that, like the National Weather Service names hurricanes, so shall I name the birds…alphabetically…starting with mens’ names. These smaller lidded guys are, from left to right, Ignatz, Hiram and Knute. Laurence didn’t make it into the photo. Of course, I don’t name them until each is done, since I’d like to think that in some way their character helps suggest the correct moniker.
Dennis Allen suggested, and Megan identified, the similarity between the long necked bird in my last blog post and Feathers McGraw from the Wallace and Gromit claymation series. I often show their videos when I teach workshops!

These are the last things I’ll make stateside this summer, I leave Wednesday for Scotland and then back to my old home away from home in England. Hannah, Toff and Doug are all on the itinerary as well as visiting the pottery show at “the Pens” in Penrith. 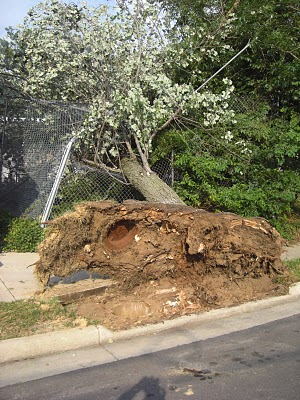 Last evening we had a ferocious ‘microburst’ storm that ravaged trees all over town. I watched a neighbor’s ancient oak tree go over in what seemed like slow motion. Another crushed a big fence at LibertyTown and others went down in a very localized area. We’ve been in big drought and I believe that it has undermined the stability of some big old beauties. If you look close you can see the manhole cover that was lifted right out of the ground!

10 Responses to “Bird Identification in Virginia”

Leave a Reply to littlewrenpottery.co.uk