My pottery career began more than 40 years ago when a college friend of mine was taking a class and he invited me to throw a pot. I was hooked on clay from the start, but never did I think then that I could or would make my living as a potter. I had a lot of wanderlust in those early days, attending several colleges, hitchhiking across the US a couple of times and eventually I found my way to England where I  got a job at the Winchcombe Pottery in Gloucestershire, England.

Winchcombe’s tradition as a country pottery began in the mid-1800’s and faded away in the early 1920’s before being revived by Michael Cardew, one of the true masters of 20th century pottery. Cardew assembled a team that included Ray Finch and several local men to produce useful handmade pottery.

By the time I landed there, Ray had been running the pottery for more than 40 years with a team of 6 producing a line of wood-fired domestic ware and my job was to support the team’s efforts, from glazing and loading and wood wrangling to, most importantly, tea making! My stay at Winchcombe had a great influence on my work. By the time I returned to the U.S. I had come to embrace the aesthetic ideas underpinning the work that the pottery produced as well as the work ethic required to survive.

I moved to Fredericksburg, Virginia in September of 1980, where I was hired to be the the manager of the Fredericksburg Pottery. I set out to make useful pots that honored the tradition of Winchcombe without being imitations. Using multiple layers of materials and techniques, I’ve tried to make pots that compliment the world we live in today. Fredericksburg has been my adopted home ever since…for many years (20+) I ran a retail shop and gallery directly from my studio on Hanover Street in the heart of downtown, just a block from the Rappahannock River. Until 2005 I sold almost all my work in town, keeping regular shop hours and immersing myself in the community.

In the early 1990’s I was invited to teach a regular course for the Art League at the Torpedo Factory in Alexandria, Virginia. About this time I also began traveling to lead workshops at schools and craft centers along the East Coast. I also began hiring assistants to help me with the shop and learn to make a line of pots that I designed. For reasons still hard to explain I started  a small school for pottery which led to the founding of the LibertyTown Arts Workshop, a center for arts and crafts that houses more than 50 local artists.

I closed the Hanover Street Studio in the spring of 2005 for reasons a local hotel builder might tell you… and established my current studio on a farm belonging to friends of mine. I have a short commute before driving down a mile long dirt road deep in the woods where I built a two-chambered, wood-fired, salt glazed kiln.The studio is off the grid and I am enjoying a quieter life, making pots in the woods and traveling to a few great shows to sell my work.

I’m still be excited about making things out of clay; I still have lots to make! 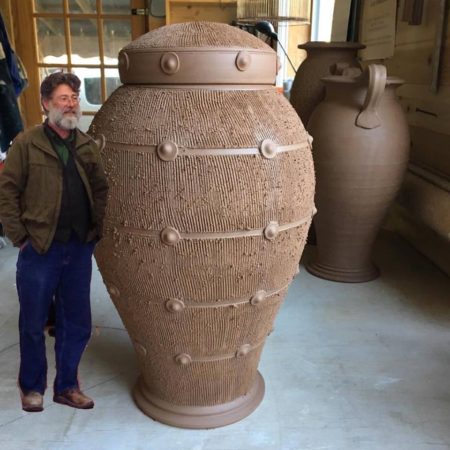