One of the problems when writing a blog is that sometimes people read them….this makes planning a surprise a little difficult and that has been my dilemma the past couple of weeks. My best friend, Toff Milway, was turning 60 years old! last week and, just like his 50th, he was throwing himself a dance party. A ‘bop’ as he called it (he really is ancient). Now, he and I have managed to be around for many significant events in both our personal and professional lives over the years, so it wasn’t easy to convince him that I wouldn’t be able to be there this time. That meant I also couldn’t write about it here on the off chance that he would finally take a look.
So, last Tuesday I headed to Dulles for my 26th visit to Great Britain since 1978. It was a whirlwind trip that included a very important visit with Ray Finch. Ray is 94 now and has only recently stopped making pots. He doesn’t hear well, but his sense of humor still shines….and we had a great time talking about old times. 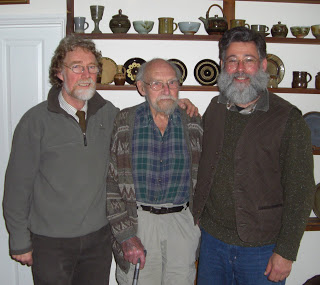 These are probably the last pots Ray will make. A bittersweet thought, especially since they are still nicer than most pots I make. Beautiful form, light as a feather. Still a Master…there aren’t many. If you are out there calling yourself one…cut it out.

This is the first powered wheel that Winchcombe used. Ignore the barbed wire, but if you look toward the bottom you’ll see two drums that were belt driven. Two holes were punched in the wall with the belt running through them to the gas driven motor that was placed outside. It was noisy and probably smelly. It was still in place when I arrived there in 1978. In many ways Winchcombe looked like something from the industrial revolution, or even earlier. These days it is very poorly looked after. Without Ray’s steady hand, the entire place has gone into decline. We all hope that some new energy will pick it back up one day. It is as significant a spot as St. Ives in my opinion. 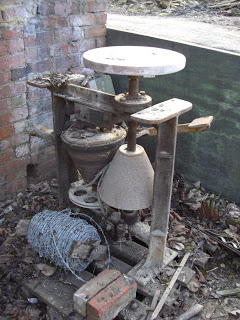 My friend, Ken Hussell, lives in a row of cottages in Conderton and this is carved over the door. I feel privileged to spend time with my friends in this place where so much history has passed. 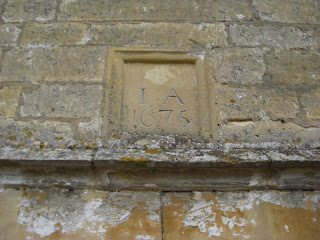 The day after the party we drove to Durham to visit with my godson, Hugh, who is studying engineering there. It’s another ancient place…the Cathedral was started in 1092, built to honor St. Cuthbert. There is also a Castle, all situated in a bend in the River Wear. It is a lively place and I always enjoy walking through college campuses. There is a palpable feeling; maybe it’s the energy produced by all those brains expanding?
Just north of Durham is this sculpture…”The Angel of the North”, the largest in Britain. 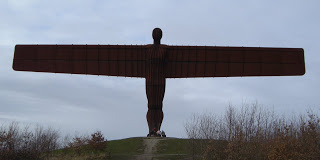 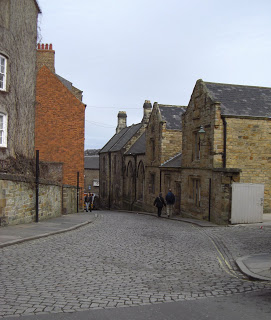 And everywhere, there is tea. My idea of heaven. 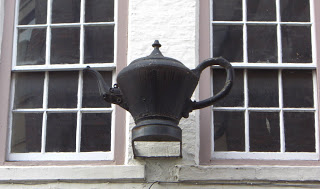 Now it’s back to work. I have to decide if I can squeeze in a firing before I go to Cape Cod next month.