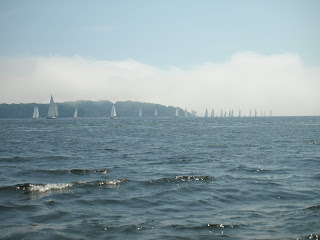 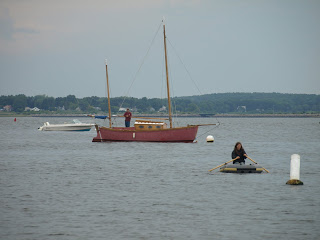 I traveled from Boston to Portland, Me. along the water the whole time. Lots of old beach towns in New Hampshire (I forgot that they had oceanfront property!?). I stopped at a particularly shabby town and played some Skee Ball for old time’s sake. I’ve still got the skills that I honed avoiding roller coasters in my youth!
Anyway I spent a great afternoon sailing with Martha Briana, an artist friend of mine, on Casco Bay. This is Martha rowing out to her pink boat in her rubber dinghy. That’s John, her maple sugaring friend, standing in the boat. This was all new to me and pretty damn cool. There was a big sailboat race in the Bay with a few really old ones that made me think of pirates. We were heading for the ocean when an amazing fog bank came up and blocked our way.
Portland was a great town…we had the best wood fired pizza…beets, green beans and feta cheese with a balsamic reduction on top.
From there I headed for Deer Isle via another scenic route past more water and a whole lot of book stores! I didn’t come across too many pots of interest but I scored a few great books. I’ll post some photos later.
Deer Isle is the home of Haystack Mt. School of Crafts…and Farrell Ruppurt, a fine blacksmith and a finer human being. I visited with both and heard a lecture by Chris Gustin and stayed with Paul Cymrot and the entire Simpson family for the night before turning around. 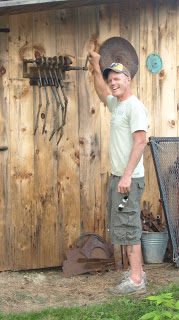 This is Farrell cranking his awesome door knocker …jointed fingers that drum on the door like we might do on a table! We ate wild blueberries and blackberries and had a beer on the rocky beach.

I returned via the Berkshire Mts. and was hoping to visit with Andrew Coombs, but Port Chester was just too close to NYC and I didn’t think I could cope, so I just blasted on home.
I’m generally reluctant to write too much here, so I’m omitting all kinds of things…the Granite Museum, the camp in Conn. where I once worked, Todd Piker and Cornwall Bridge Pottery, Lacoste Gallery in Concord, the new/old gallery in the village of Deere Isle(great pots!) etc.