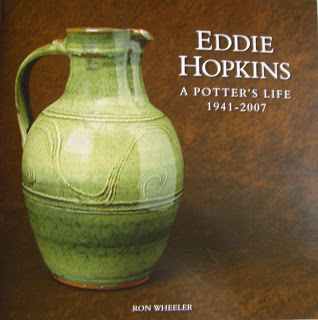 I’m back home now and still getting my bearings in the heat and humidity of a Virginia August. I’ll no doubt post a few more random blogs about my English journey later, but the last day of my stay we held the opening of the exhibition for our dear friend Eddie ‘Pot” Hopkins. Eddie spent more than 45 years making pots, most of them at Winchcombe. He taught me a lot and touched lots of people with his infectious good humor. I include this gratuitous photo of the team as it was when I worked with he and Ray and the rest. From left to right is:
Eddie w/the pottery sign, Sid Tustin, Steve Marchant (wood turner), Will Hall (furniture maker), myself, Mike Finch, Norri de Montigny, and Keith Jamison (sculptor). Sitting in the middle is Ray Finch and Toff Milway is crouched to the right. 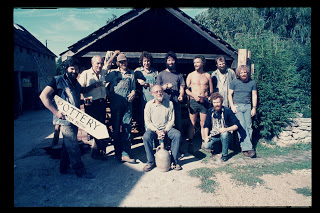 Eddie probably made a million pots in his day…he was the main production thrower at Winchcombe making lots of different things 8 hours a day, 5 and 6 days a week….plates, mugs, casseroles, baking dishes, bread crocks, goblets, vases and more.
He was most notable for the jugs/pitchers that he made. They are robust and generous in form, the pot being the man, as we know it can sometimes be. 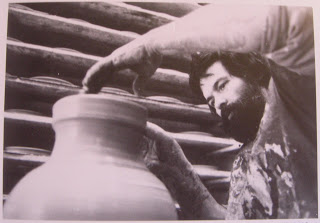 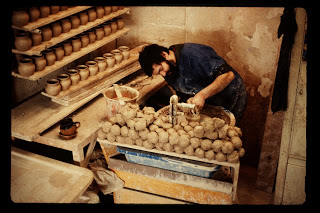 Eddie would make and handle 500 of these mugs in less than a week! and would keep up a conversation and listen to cricket matches on the old tube radio all at the same time! If you look closely you’ll notice that each layer has two boards of 12 each and he’s working on filling a board that makes 120 so far that day! Also note the jugs at the top. 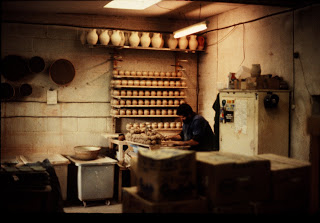 Ed loved to make big pots, but most of the time that was Ray’s turf. Once in a while Ray would would be away for a time and then Eddie was able to strut his stuff a bit more, making big bread crocks and cider jars and jugs. 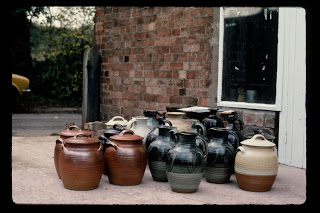 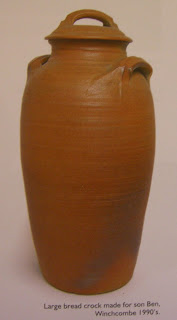 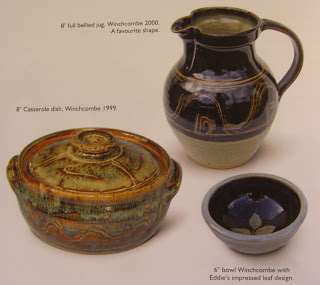 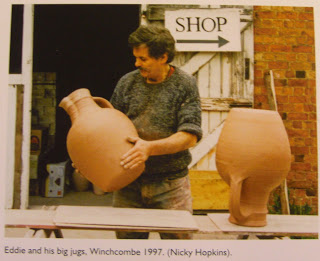 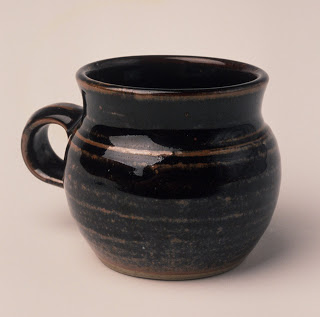 The rest of these photos are from the book that Ron Wheeler authored in conjunction with the exhibition. I’ll post more about the opening soon, it was a very good day.

Eddie retired in 2006 and sadly died two years ago from ingesting bad water after nearly drowning in the terrible floods that hit his home two years ago. He lived a very full life and was much beloved by a huge and diverse cross section of people..all of whom were lucky to know him.