Hugh Milway, son of Toff and my favorite godson will graduate from Durham University later this year and before putting the engineering degree he is earning to use he is determined to see the world and go exploring. A man after my own heart!
So some time this summer he and a few friends are undertaking The Mongol Rally! The Rally is described as “10,000 miles of bad roads, no roads, bandits, 3 deserts, 5 mountain ranges and adventuring bliss” This is semi-organized by a group called The Adventurists and they have a big web site that tells all about it. In addition to the challenge is a great goodwill component…each team raises funds for a charity and Hugh’s team will be driving an ambulance which they will also donate when they get there. His team is keeping a blog which won’t be too active until they get on the road. In the meantime we are having a raffle here at D.F.S.P. in cooperation with Conderton Pottery. 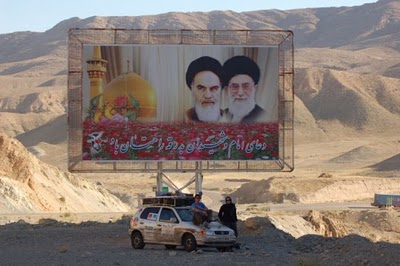 I left parts for 2 birds at Toff’s workshop last summer and he finished them, making what seems to be a cross between his fish and my birds. What’s kind of crazy is that these are our first collaborations after more than 30 years of friendship! Fired in Toff’s salt glaze kiln, they are rare beauties indeed and you can take a chance, or two, or more by purchasing a ‘raffle’ ticket.
If you go to this page of Toff’s website and scroll to the bottom there are three charities that you can make a donation to. 5 pounds (about $7.50 these days) is the minimum donation. Each donation gets your name in the hat for the drawing in July. Don’t forget to leave your email address in the message area…that’s how we’ll track you down when you win. (someone has to! it could be you!)

You can donate via paypal if you’d like…eventually they’ll ask you for a British address. Just type in “the Old Forge” and “GL20 7PP” for the postal code. It’s Toff’s address.

2 Responses to “The Mongol Rally Fundraiser”