Part III in a Series.
The Guildhouse was the brainchild of Mary Osborne and her story is well worth telling. Mary worked in the east end of London as a social worker before WW2…this was a very impoverished area and it was here that she encountered Mahatma Gandhi who became a friend and inspiration.
When the Germans started bombing London during the war, a lot of people, particularly women and children, were moved out of the city to rural villages all over the west of England and this is how Mary ended up in the village of Laverton in the Cotswolds. Many of the children were separated from their families and they were soon visiting  her cottage, drawn by her kind and sparkly demeanor and, no doubt, some of her more ‘eccentric’ ways. Mary was a spinner and a weaver as was Gandhi, who quite famously was pictured spinning himself. It was fortuitous for her to come to this place, as the Cotswolds have long been known for the sheep that populate the landscape.
During the war, it was difficult to get even the most ordinary goods, and eventually Mary began to take some of those children for walks through the hills, gathering the little bits and pieces of wool that stuck to the fences and trees as sheep would rub against them. They would then return to her little cottage to spin the wool and later knit hats, scarves and gloves, making something for almost nothing! She became aware of the comfort that this exercise gave the children, and as time went by she developed the idea of creating a place that employed craft instruction to help people, both young and old, to work with their hands and find some peace in their life. This idea was her interpretation of the ashrams in India that Gandhi had spoken of.
It’s too long of a story to tell here, but by sheer force of will and single minded determination, she was able to raise money, engage an international volunteer group as well as local people, and finally built the place that  eventually brought me to England. To raise funds she would take the train to London with her spinning wheel and set up outside the Houses of Parliament asking for donations. In fact, she prevailed on anyone she could for help, having that single minded belief that visionaries often share. 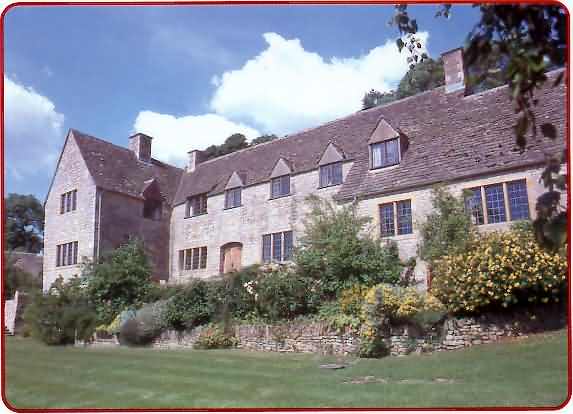 The building itself is extraordinary, set high up the escarpment and looking out across the village of Stanton and the fertile valley that lies between it and the Malvern hills. It was built of the local Cotswold stone, with a ‘great hall’ that had huge gray paving stones recovered from the streets of London and a very large hearth that dominated the room. Mary often held spinning classes with a  group of ladies arranged in a semi-circle in front of a blazing fire. This is an indelible memory for me…the gentle clatter of the spinning wheels mixing with the lilt of English voices was a wondrous sight and sound. There were 100 spinning wheels throughout the place, one of which was a gift from Gandhi himself!
The kitchen was my favorite spot (of course!) and it was there that Marta Frei presided. While I had a lot of admiration for Mary, it was Martha who I grew to adore. Martha fled Switzerland during the war and spent the rest of her days taking care of others, as a cook and housekeeper and caregiver. She was an exceedingly quirky woman, driven to extremes of frugality as a result of the hardships she had endured and she fell under the influence of a charismatic man who ‘channeled’ a spirit who supposedly came from the lost city of Atlantis! This fellow led a small group who believed that they were reincarnated from that Atlantis, and that all the former inhabitants were gathering in England to wait for it to rise again, which would be precipitated by cataclysms around the world but eventually they would lead the world forward to be a better, more peaceful place. We often sat in the kitchen late in the dim light of the evening by the Aga stove , drinking lime tea or black tea brewed from the teabags used during the day. I’m pretty certain that she thought that I was one also an Atlantean, which I took as a great compliment! As you can imagine, few people would listen to her rather unusual take on life, but this was a most sympathetic and kind woman and I was always happy to listen. I was greatly drawn to her kind and gentle nature and count myself fortunate to have known her.
I’ll relate one story more and then wrap up today’s chapter…Milk was delivered at the bottom of the hill, and I’m happy to report that it still is in these parts. The solid glass bottles are sealed with a foil top, and the little robins here would peck through the top to drink the cream! To prevent this most folks put out empty yogurt containers for the milkman to cover, but Martha didn’t. Instead she would scamper down the hill several times a day to check if the milk had arrived. I asked her once why she didn’t do as everyone else did. She replied that she didn’t think it was fair play…if the birds got there first than they should get their just reward. She was a very special and dear friend to me.
As I mentioned in a previous post, the Guildhouse was full of Winchcombe pots and it is there that  first learned of the place. I’ll tell that tale tomorrow. Thanks for reading.

2 Responses to “The Guildhouse”