I am not a summer kind of a guy, and I have been struggling to find much momentum or energy this August as the ‘dog days’ have really got me down. A couple of days ago the heat index made the temperature feel like 113 degrees Fahrenheit! It is impossible weather and I long for the cool rainy skies of England. I have lived in Virginia for more than 30 years now, and it’s obvious that I will never get used to heat and humidity like this…some folks around here tell me they like it!!
In spite of my lethargy, there are some things going on worth noting.
I’d first like to draw your attention to my friend Michael Kline’s online pottery sale. Michael and I have an exhibition running at the Washington Street Gallery in West Virginia right now, and his online sale opened yesterday. It looks like he has sold some great pots already, but there are plenty more available and if you don’t live with one (or more), pull out that wallet and get you some!
If you live anywhere near Cape Cod and you have an interest in wood firing, I will be leading a one week firing workshop at Castle Hill starting on September 7th and I believe that there are one or two spaces available if your interested. We’ll load and fire (40 hours) first and then I’ll do a throwing demo and show slides while the kiln cools down. It should be a nice time to be on the Cape (and cooler, I hope!).
I have slowly been working my way back into the studio; coil building a big bird and a couple of other things as well. If you’ve been following this here blog you might remember that I recently made a bird based on the old Martin Brothers “Wally Birds”. (Steve and Nicky have the first one which they call the Maltese Falcon). For some reason, making these shapes bigger has become my mission…I’ve always hankered to make large garden sculpture and this might be the right idea for that.
The other news is that I was diagnosed with Lyme’s disease a couple of weeks ago. I don’t think it will be a big deal, but I do have a couple of classic symptoms that hopefully will be remedied by the anti-biotics that I’m on. I’d like to blame my lack of energy on it, but I know it’s the weather. Autumn is just around the corner, thankfully. 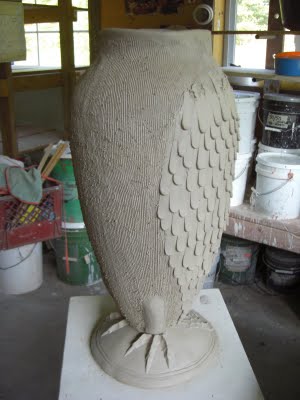