Having a contest is a rather shameless way to generate comments, but I’ve been known to be shameless more often than is fair to tell.  Thanks to everyone who took the time to enter! Even if you didn’t mean to. I’ve learned a couple of things about holding a contest :
*Two weeks is w-a-a-a-y too long to wait in the blogosphere.
*Lots of folks will enter a contest even if they don’t know the rules (all that you needed to do was make a comment! = 53 ‘entries’).
*If you make up the contest, you get to add addenda to your rules (don’t you?). In which case, I propose and accept the following tweak to my original thesis: I will pull two names, not one, from a hand made bowl (Ray Finch) and send a mug to each. This doubles your chances of winning… or dashes your hopes twice.

So, if Fetishghost from Stockton, California and Jeff Martin Ceramics from Boone, North Carolina will send along their addresses, I’ll put a mug in the post suitable for Napa Valley wine or moonshine from the hills! Stay tuned for a new and exciting contest in February… 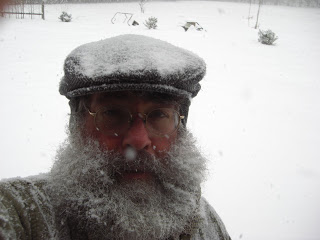 I have lots to tell about my week on the farm and yet another winter wonderland of snow. Hiking through a foot or more of new fallen snow from the studio to Paul and Emily’s house and back again was serious work and absolute joy. I’m sure it’s pushing all the buttons that were played when I was a child, but it doesn’t matter what the cause, I find it thrilling.
I also brought to an end a month of handbuilding by making this coiled pot. I’ve been meaning to make  another big pot with these bands for some time and I’m really pleased with this one. 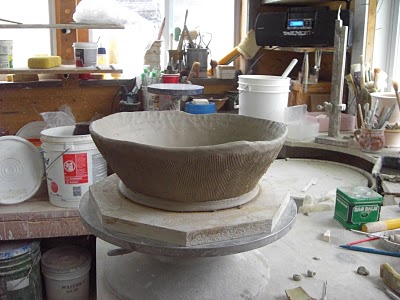 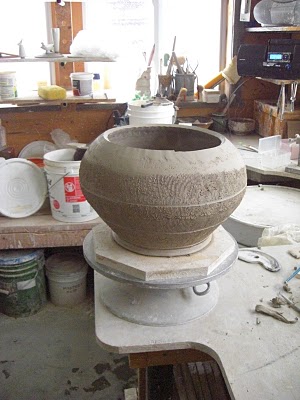 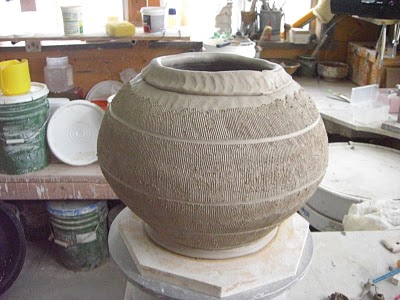 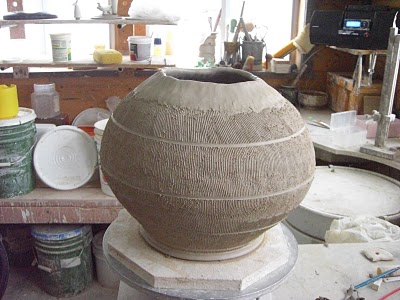 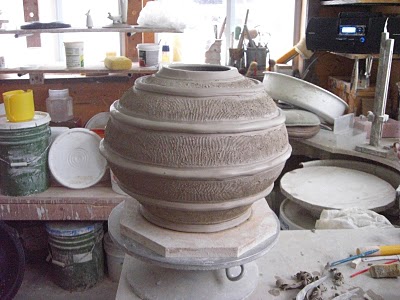 I was tempted to put a series of glass beads in the bands, but decided to leave this one be and try to throw a few more to play with. It’s such a good, classic, robust form I don’t want to mess with it.