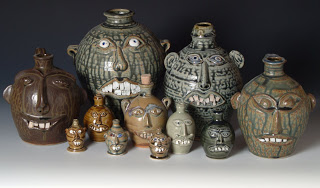 I am proud of the influence that my training at Winchcombe has on my work, but I’ve never been interested in reproduction. I want to make work that is rooted in the past but speaks ‘of and to’ the present. I really think that is what tradition is…slow evolution. Another way to say it would be that I don’t mean to appropriate but rather assimilate.
So, years ago, when my good friend Jerry Brent asked me if I would make him a face jug, my knee jerk reaction was an emphatic ‘No!’ It is somewhat puzzling to be born a Yankee and yet spend one’s entire career making pots in the south. I admire southern pots, but I have avoided the temptation to reproduce them. Years ago, the Blue Spiral Gallery invited me to be part of an exhibition of ‘Southern Potters’ ! That really kind of twisted my mind. Can a (recovered) Catholic boy from Buffalo, New York really be a ‘southern’ potter?
I’m still not sure…
Anyway, I got to thinking about Jerry’s request later on. I almost always do my best thinking later on. Now, Jerry is a native Virginian and has a great affection for the Old Dominion, its history and artifacts. I began to reason that it would do no harm and would make him happy if I set aside my rule and made him something that would bring him some small pleasure. So, later that year I made my first face jug and surprised him with it for Christmas. It was a big hit and from time to time I’ve made others and now it has come to the point that it is fair to call it a collection. The deal I made with myself was that I would make them for no one else. There are two random exceptions to this new rule that allowed me to break the old rule. Maybe I’ll write about that another day.
The photo above depicts most, but not all, of the “Brent Face Jug Collection”.

4 Responses to “A Face Jug Apologia”